Once upon a time, there were manners.

Manners were something we were taught as children.  They were drilled into us, and, imposed upon us, by our ever-authoritative, ever-diligent parents.  Kept in check during pubescent teenage years, by the time we reached young adulthood, we all knew the basics.  There were rules, and they were followed, without question.

On public transport, or in a public venue, you gave up your seat to the elderly, infirm or disabled and to the “obviously” pregnant.  You stood back to let your elders board public transport ahead of you, notwithstanding the fact that you might have been at the stop/platform before them.  You said please and thank you, and addressed your elders and those in positions of authority, with respect.

Men stood up when women entered the room, held back chairs when women went to sit down, opened doors for them to walk through, and held open car doors to allow women to sit in.  Additional courtesies extended, were assisting women on with their coats, holding umbrellas during showers, and generally standing back to let women enter first.

Of course, these were also the days when women were seen as the “delicate” or “fairer” sex, physically weaker than their stronger and in some minds “dominant” male counterparts.

When the 60s arrived, women demanded liberation, renewed the call for equality, took up more prestigious positions in the workplace, travelled abroad, started making it for themselves.

So why did it follow that the chivalry or courtesy theretofore extended to women by men, should fall by the wayside?

How has it happened that in the short period of time from the Swinging Sixties through the rise of the “power suit” in the 80s, to today’s “Lean in” movement, that it has become the norm for men to treat women, well, like men?  Or worse, with nothing short of pure rudeness!  Where did it say in the script that equality negated the need for manners?  Has the word etiquette been erased out of modern existence? Is respect something of the twilight past?

I do not claim to speak for all women.  I don’t pretend that times haven’t changed and social mores and behaviours have not moved on accordingly.  I don’t expect Raleighesque behaviours in 2014.  But what I do expect, is manners.  I behave according to the way I was reared and I expect others to do likewise.  I do not for one minute believe that the men who are behaving in such a way today, were not taught manners or appropriate behaviours by their parents. 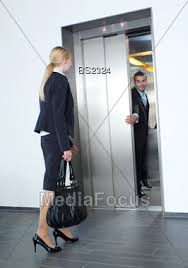 So what is it exactly that I object to??

I was in London recently on business (lucky me!) I arrived for my meeting at a well appointed office near Tower.  All very slick.  I walked towards the lift and as I approached, the door started to close.  There was a “gent” (not) inside. Instead of trying to stop the door, or push the open-door button, he just looked at me, lookd away, and let the door close, bam, in my face!

Back in Dublin, I don’t need to travel beyond my very own workplace to experience rudeness on a daily basis.  My office is in a lovely area of town.  Bright, modern, with big steel framed glass security doors at reception: you need a swipe to get through them.

Lack of manners doesn’t necessarily just pertain to door-opening or holding though.  As I was walking to work through the city centre this morning (catalyst for this long brewing blog), a man, overtaking another pedestrian, continued to walk directly towards me, despite the fact that I was walking at the edge of the path.  He hit off me so viciously that he sent me flying into the road.  Luckily for me, I had seen this coming and had braced myself; even more lucky for me, was the fact that there were no vehicles on the road at that time.

When did it become the norm for men to behave like this?  This isn’t the first time that I’ve been knocked, hit, swished, stepped on, pushed or bashed against, on the streets of town by men/boys/guys  – only the very old or infirm are innocent of having committed this offence.  And I do consider it to be an offence.  It is rude, it is intrusive, in some respects it is intimidating, and if nothing else guys, it can bloody well hurt!

Men don’t seem to realise how hard a big shoulder at high speed can feel against a particularly narrow one.  What’s even worse, is that more often that not,  this will not be followed by an apology, no” I’m sorry”, “are you okay”, “my apologies”.  Very rarely has a man stopped and apologised for knocking into me.

I am trying to remember when this stopped happening; I am thinking since c2000. Certainly the current breed of next gen don’t even know that anyone outside of their world exists.  They walk the paths 4-fold and everyone else is expected to step out of the way.  Young boys these days have absolutely no respect for females, and that is no more evident than on public transport. 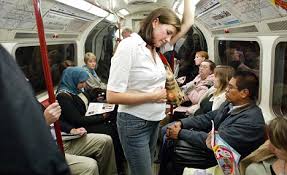 Remember when the elderly, or pregnant women used to board the bus, tube, train?  There’d be a rush of people jumping up to offer their seats: that is what you were taught to do.  It was called manners.  It was called respect.  Now, they are just elbowed out of the way, in the rush to board the bus.  The young clamber into seats and no matter how aged, how infirm, how heavily pregnant, some passengers are, they are very clearly ignored and  left to stand.

It’s insulting and it’s infuriating, particularly when some of the seats they occupy are the designated seats which are meant to be given up for those less firm than ourselves.  I recently witnessed two young guys completely ignore two elderly ladies left to stand after boarding the bus.  When, on being asked by an elderly gent behind them, to give up their seat, they refused.  So what happened?  He stood up himself to let one of the ladies sit down.  And old man, forced to stand, whilst two healthy 20somethings sat chatting and laughing in the designated seats.

If this is what men have become, the question is why?  Why do men no longer respect women in the way they used to? And I do believe it is a matter or respect.  If anyone knows the answer, please do let me know.  In the meantime, I’ll continue to dodge the bullets and nurse my bruises.

I’m not asking you to stand when I walk into the room, I’ll even open the car door myself!  But some manners, a bit of courtesy and a drop of respect, now they would be nice!