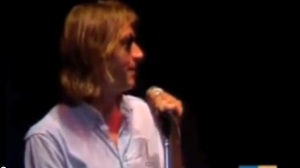 It was never released as a single, but was included in the EMI 1990 reissue of the album’s title track, “It’s my Life”, when the two songs compiled a 7″ single.  The version of “Renee” that appeared on this reissue was live (7:28m), recorded during Talk Talk’s concert in Hammersmith, London on 8th May, 1986.

Hollis’ plaintive voice lends itself to the emotional depth of the song, however, one interviewer back in 1984, begged to differ.  Accusing Hollis of being so withdrawn that none of “the man” came through in either music or performance, and, that maybe he would be best categorised as a “singer-songwriter”, he replied:-

“You may be right. Emotive singers like Van and Otis Redding make very open sounding music. What we do is more closed, textural. Honestly, I often arrange the songs with people like Debussy in mind, so that the singing has to be a texture. If it were different, maybe I could sing it more emotively … Alright, the songs do start as just a piano and my voice, but that whole singer-songwriter thing has such a terrible sound to it. It’s as bad as being called a session man!”

This live version below, the last song of their Salamanca set-list (10th September, 1986), and one of their last live performances ever, is a perfect example of Hollis giving “texture” as he calls it, to the vocal.  It is a performance in line with the emotional quality of the song, but given that Talk Talk were not all about the great romance (in the slushy sense), anything more intense would be overkill.  Hollis sings using phonetic (stress) techniques, and, this is key to giving the vocal performance emphasis at the appropriate or relevant points.

What is the song about? Fairly obvious (to me, a lot of Hollis’ lyrics are – mind you some are as muddied as hell).

But the prize that you’ve been losing was youth

“Throw the ace and face up to the truth”

Again, nothing too intellectual and doesn’t need a thesaurus for translation.

Whether the performance in this video is emotional or not, I’ll leave for the viewer to decide. What I will say, is that the live performances of “Renee” were head and shoulders above the original album audio.  For one, there is additional, over-layered instrumentation; the piano element has been extended and been given greater emphasis; the guitar playing is subtle so as to be almost inaudible at times, but is very much a part of the musical-backbone. Further, Hollis’ vocal is much naturally stronger, emphatic and poignant live (I think I answered the emotional point just then!).

What makes this track, aside from the Hollis vocal, is Lee Harris’ wonderful mastery of the electronic drum.  His percussion here is ‘subtlety personified’ – the touch is light, rhythmic, thoughtful.  It’s beat underpins the vocal weighting from downbeat to upbeat – there is perfect synchronicity.

So, here you go, Talk Talk live September 1986, Salamanca (plus lyrics as usual), in one of their last ever concerts (they never played live after 1986 – more of which anon) – decide for yourselves.  Beauty is in the “ear of the listener”

Well, baby how the weeks fade

Baby, was the best part of your youth a sensation

I never thought I’d end up fooling you

Do you hear what they say?

All these people living up in my street

“Out of touch, she lives in faded dreams”

And maybe when the cheat plays

Maybe when the ace falls from his suit

And he tells you “Yeah, that’s the game,

I didn’t want to lose it on the two”

But the prize that you’ve been losing was youth

“Throw the ace and face up to the truth”

But baby, how the weeks fade

But baby, as the weeks change

Irish superlative superuser and hyperbolic hack, using in her opinion, a particularly subtle nom de plume! Scribes mainly about non-mainstream music - that's not to say that your latest Black and Decker symphony will go down well. Writes copy, blurbs, press-releases and bios to pay the bills - not so subtle hint. Also pens words for The Monitors and spends countless hours listening to/moderating & sometimes reviewing an as long as your leg weekly playlist of new music for 'Rock God' Tom Robinson, over at Fresh on the Net! Quirky is Qey! Mentioning the 405 will get you blocked! View all posts by dervswerve